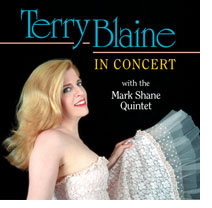 Terry Blaine in Concert was the result of our love affair with Cleveland, Ohio, which began in earnest after the DJs from WRMR radio, especially Bill Randle, started playing songs from Whose Honey Are You in early 1994. Audiences couldn’t get enough of “Louisiana Fairytale,” and “A Little Bit Independent,” which became the two most popular numbers, and wanted to see us in concert. So Bill talked to the station, and they set up not one but two dates for us in Cleveland; the first, in April, at the legendary Swingo’s Restaurant, which was completely sold out in no time. We had a great band, including Ohio native Ken Peplowski on clarinet and sax, and Ed Polcer on cornet. My husband and son came with me from New York, and I think that six-month-old Michael, who slept through the entire thing and woke up just as we were finishing, stole the show. So many friends and fans remember us walking through the crowd at the end, with this little baby in the carrier, tired but happy; we still talk about that night!

Six months later, Bill suggested we try a larger show, and why not record it and do a follow-up CD? Now I had never done a live show before, but decided to go for it. We had excellent help with the sound from Franklin Karkowski, who did the concert sound, and Tom Knab, who engineered the recording with my husband, Tom Desisto. I think we were somehow able to capture the absolutely electric atmosphere from that night on Terry Blaine in Concert. Again, we had a splendid band that featured Ed Polcer and Allan Vaché, and the Masonic Auditorium, with 2000 seats, was nearly full. After the show, John Bitter wrote a wonderful piece about us called “Cleveland’s Louisiana Fairytale” that appeared in The Mississippi Rag, along with some great pictures of both our Cleveland shows. And it did feel kind of like that, almost magical, that we could touch an entire city that way. Even to this day, our love affair with Cleveland goes on!

“What makes Blaine unique and important is her blending of the songs and insights of Billie Holiday, Fats Waller, Mildred Bailey and Lee Wiley (to name a few) with the cutting edge of Patsy Cline. The result is a powerful and rich new synthesis of ‘then and now’.”
— Bill Randle, WRMR Radio, Cleveland, OH

Take Me For a Buggy Ride

When Day is Done

Keepin’ Out of Mischief Now

I’d Love To Take Orders From You

Medley: When a Woman Loves a Man/My Man

Medley: Thanks a Million/Waiting at the End of the Road