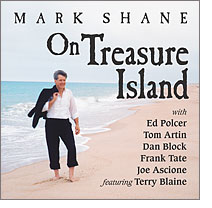 This CD features Mark Shane and a band of all-stars in various combinations. I contributed vocals to three songs, “One, Two, Button Your Shoe,” “On the Sentimental Side,” (both associated with Billie Holiday) and Irving Berlin’s “Shakin’ the Blues Away,” which is the rousing closer. Some of my favorite pieces are the trio playing “Liza,” Mark and Tom Artin on “Yacht Club Swing,” and the duets with Ed Polcer — the achingly beautiful ballad, “Don’t Know if I’m Coming or Going,” and the complete “Tiger Rag.” For those who venture to listen through to the very end of the disk without hitting the stop button, there’s even a little surprise. Aye, maties!

Mark Shane: “A band of swingin’ swashbucklers took over the recording studio the day we made On Treasure Island. I wanted the recording to be a treasure chest, full of musical gems of different textures and colors, featuring varied instrumental combinations and exuberant ensemble playing, similar to the format of the many concerts I’ve played with all of these wonderful musicians. There was no doubt in my mind that Terry Blaine was going to be the voice. I’ve always said that her time is so good, she could swing a whole city by herself, and here, she digs right in to get at that good buried treasure. Swingin’ soul — that’s what it is and all brought into wonderful focus by the superb engineering of Tom Desisto. Pat y’foot music — that’s what we play On Treasure Island. Aye, maties, indeed!!”

“Mark Shane plays piano with a jaunty grace in an outgoing, intelligent style. On Treasure Island features Shane in an excellent traditional band with musicians who play together joyously…(with) enough upbeat chemistry to get everyone up dancing.”
— Mike Neely, All About Jazz

Drop Me Off in Harlem

Get Rhythm in Your Feet

A Kiss to Build a Dream On

One, Two, Button Your Shoe

Some of These Days

On the Sentimental Side

Shakin’ the Blues Away