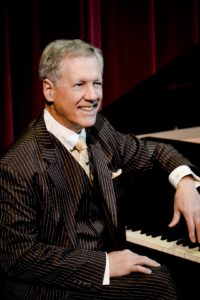 Mark has been featured on radio and television jazz special broadcasts and has appeared as a featured soloist at major jazz festivals throughout the world. He has toured with the Smithsonian Jazz Repertory Ensemble under the direction of Bob Wilber, and was featured in the 50th Anniversary Benny Goodman memorial concert at Carnegie Hall. Mark has played jazz piano for the Twyla Tharp Dance Company, as well as for the Grammy-Award-winning soundtrack of the film “The Cotton Club.” Other film work includes the soundtracks to “Brighton Beach Memoirs,” “Biloxi Blues,” “Working Girl,” and other films made for television. During the Carnegie Hall 100th Anniversary Celebration, he accompanied hosts Beverly Sills and Barbara Walters. In 1989, Mark played a Royal Command performance for HRH Princess Anne in London’s Festival Hall.

Featured with the Peter Duchin and Lester Lanin Orchestras, Mark Shane has played for society and debutante cotillions throughout the United States, for Presidential Inaugural Balls in Washington, D.C., and for the Mayor of New York City at Gracie Mansion. He has also played private parties for Mikhail Gorbbachev, Henry Kissinger, Estee Lauder, Arnold Schwarzenegger, and for openings and fund raising events at major libraries, museums and cultural centers throughout the United States. Corporate audiences such as IBM, AT&T and others have also enjoyed Mark’s piano in New York’s finest hotels and clubs, including the Waldorf-Astoria, Plaza, St. Regis, Ritz-Carlton, 21 Club and others.

Mark Shane’s piano reflects a true sense of living jazz history and continues the tradition of buoyant swing and lyrical melodic improvisation which is CLASSIC JAZZ PIANO, America’s unique musical contribution to world culture. He lives in Walden, NY with his wife, Alice.