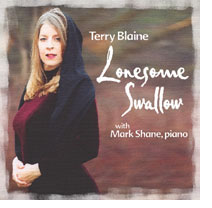 I’m so proud to announce the release of Lonesome Swallow, my brand new CD with Mark Shane on piano. It’s our fifth major recording project together! We were inspired by the great duet recordings of Ethel Waters and James P. Johnson, and so Lonesome Swallow features us in an intimate duo setting, performing some of our favorite songs from the 20s, 30s and 40s.

Mark and I started as a duo, swinging large crowds of people into good health at Cafe Society in New York City. The restaurant (featured in the Christmas Party scene from the Tom Hanks movie Big) became a favorite downtown hangout, with the big band Swing Fever holding forth, and Mark and me as the “intermission pianist & femme chirp,” every Monday evening. Soon the New York Swing Dance Society made it their Monday night stop, and the rest is history!

We made our first duo recording around then, a demo tape that Steve Allen played on his WNEW radio show, The Make-Believe Ballroom. And, as we began to perform together in various settings, we continued to work as a duo because we felt that something special happened musically when it was just us. Then in May of 2001, we did our first gig at the Sacramento Jazz Jubilee, where we played five sets as a featured duo and thought, “hmmm, we should do a recording, just the two of us.” We were in the process of putting together a show around the music of Ethel Waters, and our research showed that she and James P. Johnson had done only one recording session together, four songs, in August of 1928. But what a session it was! They performed “Guess Who’s in Town,” “My Handy Man,” “Do What You Did Last Night,” and “Lonesome Swallow.” I don’t think I had ever heard “Lonesome Swallow” before, and I fell in love with the tune. So over the summer we rehearsed the show and kept the idea of the recording project on the back burner.

The debut of our Lonesome Swallow show took place on September 13, 2001, just two days after the attack on the World Trade Center in NYC. At first we weren’t sure if we should go, but then we thought, “what would Ethel have done? What better way to bring love and healing energy into the world than through music?” So we went ahead. It was a night unlike any other I can remember, as the crowd that came to The Manor in W. Orange, NJ to see us brought so much love and emotion that it was all we could do to get through the performance. But we did, and what a great night it was. Again, we were a duo, as our bass and drums were unable to get there. And again, we said, “hmmm… we should record some of these tunes just the two of us…”

Finally, as Thanksgiving approached, we made it into the studio, recording many of the Ethel Waters tunes, and some of our other favorites too, like “Long About Midnight,” “I’m Glad There is You,” “Squeeze Me” and “Home (When Shadows Fall)”. We had ideas for a horn here, some voices there, or maybe even a few tunes with rhythm section, but after hearing the songs back, it was obvious that Lonesome Swallow was indeed a duo recording, so we left it as it was. As much of a showcase as it is for me as a singer, it is also a wonderful instrumental feature for Mark Shane’s piano playing which is, in my humble opinion, superb. And I hope you enjoy hearing the CD as much as we enjoyed putting it together and performing it.

TRACKS:
Squeeze Me
Lonesome Swallow
I Got Rhythm
My Handy Man
Memories of You
Hate to Talk About Myself
Willow Tree
Am I Blue
I’m Glad There is You
Jeepers Creepers
River (Stay ‘Way From My Door)
You Don’t Understand
Do What You Did Last Night
100 Years From Today
Long About Midnight
Shim Sham Shimmy Dance
Don’t Cry Baby
Home (When Shadows Fall)