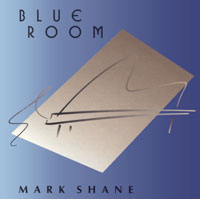 My first recording project as an artist was Mark Shane’s Blue Room. Mark and I had been working at Cafe Society for several years, and had developed a great repertoire of tunes. When he told me he wanted me to sing a few numbers on his new CD, I was thrilled. I remember going out to Long Island to Doug Wood’s studio at Omni Music to record my songs; what a band Mark had assembled! I had a great time singing “Them There Eyes,” “Did I Remember” and “Eeny Meeny Miney Mo,” all of which became staples in our live shows. After we finished this CD, we decided to put together one for me. That recording would become Whose Honey Are You.

Mark Shane: “When I think back to the making of Blue Room, I remember an almost circus-like atmosphere in the recording studio. Filled with so many wonderful players, the room became a musical menagerie of the rich jazz talents with whom I played regularly. I especially wanted to record with Earl May, whose bass playing I had long admired and with whom I shared a nightly stage some years ago alongside the late great Remo Palmier. Along with Earl, I wanted to feature the bass playing of Bill Crow, who has played with so many greats. I knew that when Earl and Bill locked in with the amazing drum sound of Danny D’Imperio, magic would be made. Danny’s superb playing is the very essence of jazz. I also wished to spotlight the cornet and trumpet of Ed Polcer and Spanky Davis, building a band of hot players around them and hopefully, encouraging them into a brass battle or two. The other players added plenty of heat: Ken Peplowski, Tom Artin and the amazing Frank Vignola, who swings the rhythm section right along and works out so vigorously with me on the title tune. I especially wanted to record with Terry Blaine, whose contribution here is only the beginning of a long and fruitful collaboration. Blue Room spotlighted alot of great players in different settings and also in ensemble. The effect will make you “pat y’foot” and put a smile on your face.”

I Had to Do It

Every Now and Then/
Breakin’ In a Pair of Shoes

Too Hot for Words

(If I Had) Rhythm in My Nursery Rhymes