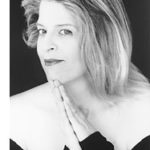 Jazz vocalist Terry Blaine was born in NYC, and has been singing virtually all of her life. Embracing both pop and classical styles, it was not until after she graduated Summa Cum Laude from the University of Buffalo with a BA in Music that she chose to trade in her flute for a microphone. As a singer and musician, she has enjoyed a multi-faceted career that includes live performances, recordings, studio work, television and radio shows, musical composition, songwriting and production. Her unique interpretations of classic jazz standards have brought her international attention and recognition as one of the few contemporary female jazz singers performing the hot small-band swing material from the 1930s.

Forging a fresh link in the regal chain that recalls the tradition of Billie Holiday, Bessie Smith, Ethel Waters, and others, Terry’s style of singing is a gentle, swinging reminder of who we were and where we came from, instilled with a spirit that only genuine affection can inspire. Her collaboration with classic jazz pianist Mark Shane, which began with a three-and-a-half year duo engagement at Café Society in Greenwich Village, led to the CD “Whose Honey Are You,” a Jazz Journal International Record of the Year. With support from enthusiastic fans and radio stations all around the country, a pair of sold-out, breakthrough concerts launched the duo into the larger world of concert appearances and touring. A second CD, “Terry Blaine in Concert,” was released. Terry & Mark have since performed at prestigious venues such as Michael’s Pub, Fat Tuesday’s, the Plaza Hotel, the Lakeland Jazz Festival, JVC New Jersey Jazz Festival, Artown Celebration in Reno, NV, Colorado Jazz Party, Pabst Theater in Milwaukee, WI, Sarasota Opera House in Florida, the Norris Center for the Performing Arts in Los Angeles, and the Sacramento Jazz Jubilee.

A concert CD, “With Thee I Swing,” was recorded in Germany for the Nagel-Heyer label. An accompanying live show and CD called “Too Hot for Words,” a tribute to the Great Ladies of Swing with songs by Bessie Smith, Billie Holiday, Ella Fitzgerald and others, was a smash, taking them around the world and back again, playing to packed houses everywhere from Germany to Cleveland, Boca Raton to Bella Vista, Arkansas. Along the way, the “Too Hot” show and CD drew praise from radio stations, fans and critics alike. A new CD and show, “Lonesome Swallow,” returns Terry and Mark to their roots as a duo, and acknowledges the influence of the great Ethel Waters and James P. Johnson duo recordings from the late 1920s.

Terry lives in Woodstock, NY with her husband, composer/producer Tom Desisto and their son, Michael. Their company, Two Pie Are Music, creates original music for TV, film, radio, recording and educational projects. They recently contributed an original song, “In a Perfect World,” (which features a vocal by Terry) to a film project by the Devereux Foundation that won an award at the 2002 Houston Film Festival.